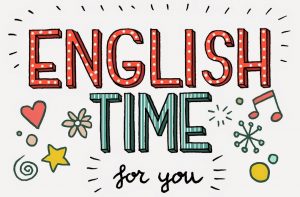 In our time, it seems inevitable for us to avoid meeting people with different cultural backgrounds. However, it becoming much easier for us to transport goods and to communicate with each other, it may happen that differences between cultures may disappear and that fast foods and disposal goods may be seen everywhere. (from a translation exercise book)

それで以下のように書き換えました：
Revised sentence:
However, it becoming much easier for us to transport goods and to communicate with each other, it may happen that differences between cultures may become less prominent and that fast foods and disposal goods may be seen everywhere.

Our new office is just one minute walk from the previous place. 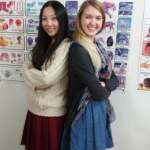 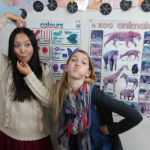 どこの国からきましたか？
Where are you from？

I have been teaching at EQ for 2 years! Always my favorite thing here is the students!
I had a lot of fun teaching with you all and it will be sad for me when I go.
Thank you for being great students.
Don’t forget to have fun with English.

たくさん楽しもうね！
Have fun with Joshua! 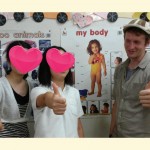 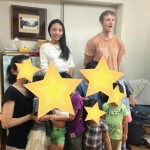 I could hear the voices of birds out of the window when I got up. Through

them, I could hear the words of flowers, delight of sunlight and whispers of

A good point for Japan is that there are many famous animations, for example, Naruto, One Pieces and Dragon Ball. They are translated into many

( I felt nature at that time when I heard birds chirping outside of my house, when I got up.)

I felt as if I was listening, through the birds chirping, to the flowers singing, sunshine cry with joy and leaves murmuring.

(It is a good point in Japan that trains arrive at a station and depart from there on time. To my surprise, American trains delayed for ten minutes when I went to there. There is not such things in my country. So, businessmans can depend on them in easy . I think keeping time is very wonderful.)

What is a good point about Japan is that trains arrive and depart at the station on time. To my surprise, my train was delayed for 10 minutes when I was in America. In Japan this never happens. So business men can easily depend on them. I think punctuality is a wonderful thing

I heard birds singing out of the window when I woke up. It sounded like the words of flowers, the delight of sunlight and the whispers of leaves. 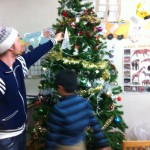 We are looking forward to seeing you!
Enjoy Christmas together!
(by Joshua)