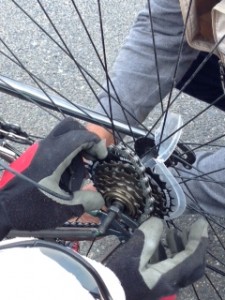 I bought a new bicycle not too long ago. It’s made by Volkswagon. I didn’t know they made bikes but it looks pretty cool and it was at a pretty good price. My friend Jack had also just bought a bike and since we were both eager to try them out.  We decided to take them with us aboard the ferry to Miyajima(an island near Hiroshima). It was bad luck though, the ferry that went to Miyajima didn’t allow bicycles onboard, So we thought for a little bit and decided to take bikes to Etajima(another island).

After arriving in Kirikushi bay we began to ride our bikes. The roads were empty and the towns were very quiet, except one little town seemed to have a lot of people outside of their homes. It was a very small town. We were a little curious about what was happening but we decided to keep biking.  The sun would set in only four hours so we couldn’t waste much time. Right in the middle of the small town we were biking though,  there was a very steep hill where suddenly my bike chain had fallen off.  What bad luck!  But this was a problem I knew how to fix. However, I couldn’t get the chain back on, it was very stuck.

I decided to head back down the hill and try to find someone with some tools that could help me.  It didn’t take long since most of the people in the town were outside of their homes and because I was in a  country like Japan where it is easy to find some help.

It was still really stuck. After a short time, I had a big bag of tools and four kind Japanese people trying to help me with my bicycle. Two hours later, it was still stuck. 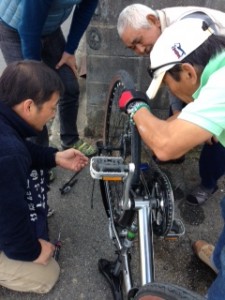 As we were taking the wheel off, a lot of cars and vans started showing up and I heard the noise of girls screaming for excitement. I found somebody to explain it all to me.  They were filming for a television drama called, “Umi no Ue no Shinryojo (a clinic on an remote island) ”,  usually just referred to as Dr Kota. The girls were actually screaming for Nasaki Nozomi, who was a guest on the show. She was a little bit far away but I was able to take this picture. 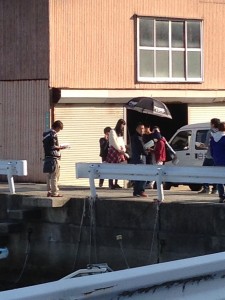 So after all that, my bike was fixed and nearly ready to go when a van parked right next to us and a man following another man walked past us. It was Matsuda Shota, the star of the show! I didn’t take a picture of him since there was a man waving his hands in front of him telling us not to.

In the end, I guess we were rather lucky to have our plans changed then for my bicycle to break down at the right time and place. I have never seen anyone famous before and I certainly didn’t expect my first encounter to be a well known Japanese drama actor.